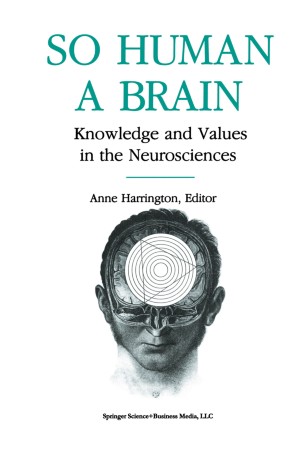 So Human a Brain

Knowledge and Values in the Neurosciences

WALTER A. ROSENBLITH Footnotes to the Recent History of Neuroscience: Personal Reflections and Microstories The workshop upon which this volume is based offered me an opportunity to renew contact fairly painlessly with workers in the brain sciences, not just as a participant/observer but maybe as what might be called a teller of microstories. I had originally become curious about the brain by way of my wife's senior thesis, in which she attempted to relate electroencephalography to certain aspects of human behavior. As a then-budding physicist and communications engineer, I had barely heard about brain waves, nor had I studied physiology in a systematic way. My work on noise dealt with the effects of certain acoustical stimuli on biological structures and entire organisms. This was the period immediately after World War II when many scientists and engineers who had done applied work in the war effort were trying to find their way among the challenging new fields that were opening up. Francis Crick, among others, has described such a search taking place in the cafes of the "other" Cambridge, the one on the Cam. At that time the brain sciences, in his opinion, offered much less promise than molecular biology. However, he was sufficiently attracted by what they might eventually have to offer to keep an eye on them, and several decades later his work turned toward the brain.