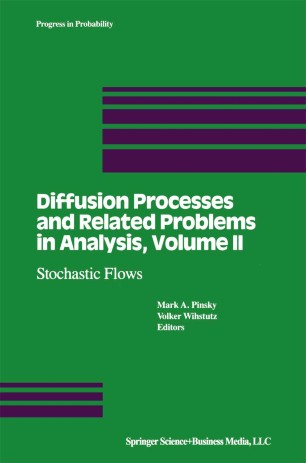 Part of the Progress in Probability book series (PRPR, volume 27)

During the weekend of March 16-18, 1990 the University of North Carolina at Charlotte hosted a conference on the subject of stochastic flows, as part of a Special Activity Month in the Department of Mathematics. This conference was supported jointly by a National Science Foundation grant and by the University of North Carolina at Charlotte. Originally conceived as a regional conference for researchers in the Southeastern United States, the conference eventually drew participation from both coasts of the U. S. and from abroad. This broad-based par­ ticipation reflects a growing interest in the viewpoint of stochastic flows, particularly in probability theory and more generally in mathematics as a whole. While the theory of deterministic flows can be considered classical, the stochastic counterpart has only been developed in the past decade, through the efforts of Harris, Kunita, Elworthy, Baxendale and others. Much of this work was done in close connection with the theory of diffusion processes, where dynamical systems implicitly enter probability theory by means of stochastic differential equations. In this regard, the Charlotte conference served as a natural outgrowth of the Conference on Diffusion Processes, held at Northwestern University, Evanston Illinois in October 1989, the proceedings of which has now been published as Volume I of the current series. Due to this natural flow of ideas, and with the assistance and support of the Editorial Board, it was decided to organize the present two-volume effort.