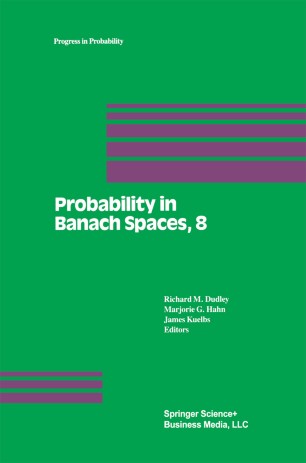 Probability in Banach Spaces, 8: Proceedings of the Eighth International Conference

Part of the Progress in Probability book series (PRPR, volume 30)

Probability limit theorems in infinite-dimensional spaces give conditions un­ der which convergence holds uniformly over an infinite class of sets or functions. Early results in this direction were the Glivenko-Cantelli, Kolmogorov-Smirnov and Donsker theorems for empirical distribution functions. Already in these cases there is convergence in Banach spaces that are not only infinite-dimensional but nonsep­ arable. But the theory in such spaces developed slowly until the late 1970's. Meanwhile, work on probability in separable Banach spaces, in relation with the geometry of those spaces, began in the 1950's and developed strongly in the 1960's and 70's. We have in mind here also work on sample continuity and boundedness of Gaussian processes and random methods in harmonic analysis. By the mid-70's a substantial theory was in place, including sharp infinite-dimensional limit theorems under either metric entropy or geometric conditions. Then, modern empirical process theory began to develop, where the collection of half-lines in the line has been replaced by much more general collections of sets in and functions on multidimensional spaces. Many of the main ideas from probability in separable Banach spaces turned out to have one or more useful analogues for empirical processes. Tightness became "asymptotic equicontinuity. " Metric entropy remained useful but also was adapted to metric entropy with bracketing, random entropies, and Kolchinskii-Pollard entropy. Even norms themselves were in some situations replaced by measurable majorants, to which the well-developed separable theory then carried over straightforwardly.