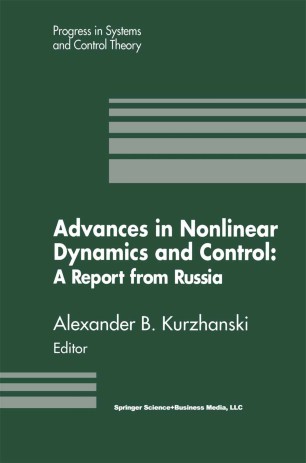 Advances in Nonlinear Dynamics and Control: A Report from Russia

Part of the Progress in Systems and Control Theory book series (PSCT, volume 17)

The purpose of this volume is to present a coherent collection of overviews of recent Russian research in Control Theory and Nonlinear Dynamics written by active investigators in these fields. It is needless to say that the contribution of the scientists of the former Soviet Union to the development of nonlinear dynamics and control was significant and that their scientific schools and research community have highly evolved points of view, accents and depth which complemented, enhanced and sometimes inspired research directions in the West. With scientific exchange strongly increasing, there is still a consider­ able number of Eastern publications unknown to the Western community. We have therefore encouraged the authors to produce extended bibliogra­ phies in their papers. The particular emphasis of this volume is on the treatment of uncer­ tain systems in a deterministic setting-a field highly developed in the former Soviet Union and actively investigated in the West. The topics are concentrated around the three main branches of un­ certain dynamics which are the theory of Differential Games, the set­ membership approach to Evolution, Estimation and Control and the the­ ory of Robust Stabilization. The application of these techniques to non­ linear systems as well as the global optimization of the latter are also among the issues treated in this volume.