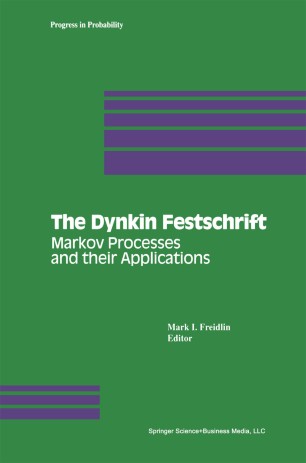 Markov Processes and their Applications

Part of the Progress in Probability book series (PRPR, volume 34)

Onishchik, A. A. Kirillov, and E. B. Vinberg, who obtained their first results on Lie groups in Dynkin's seminar. At a later stage, the work of the seminar was greatly enriched by the active participation of 1. 1. Pyatetskii­ Shapiro. As already noted, Dynkin started to work in probability as far back as his undergraduate studies. In fact, his first published paper deals with a problem arising in Markov chain theory. The most significant among his earliest probabilistic results concern sufficient statistics. In [15] and [17], Dynkin described all families of one-dimensional probability distributions admitting non-trivial sufficient statistics. These papers have considerably influenced the subsequent research in this field. But Dynkin's most famous results in probability concern the theory of Markov processes. Following Kolmogorov, Feller, Doob and Ito, Dynkin opened a new chapter in the theory of Markov processes. He created the fundamental concept of a Markov process as a family of measures corresponding to var­ ious initial times and states and he defined time homogeneous processes in terms of the shift operators ()t. In a joint paper with his student A.