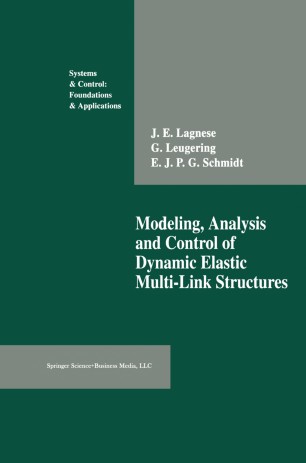 The purpose of this monograph is threefold. First, mathematical models of the transient behavior of some or all of the state variables describing the motion of multiple-link flexible structures will be developed. The structures which we have in mind consist of finitely many interconnected flexible ele­ ments such as strings, beams, plates and shells or combinations thereof and are representative of trusses, frames, robot arms, solar panels, antennae, deformable mirrors, etc. , currently in use. For example, a typical subsys­ tem found in almost all aircraft and space vehicles consists of beam, plate and/or shell elements attached to each other in a rigid or flexible manner. Due to limitations on their weights, the elements themselves must be highly flexible, and due to limitations on their initial configuration (i. e. , before de­ ployment), those aggregates often have to contain several links so that the substructure may be unfolded or telescoped once it is deployed. The point of view we wish to adopt is that in order to understand completely the dynamic response of a complex elastic structure it is not sufficient to con­ to take into account the sider only its global motion but also necessary flexibility of individual elements and the interaction and transmission of elastic effects such as bending, torsion and axial deformations at junctions where members are connected to each other. The second object of this book is to provide rigorous mathematical analyses of the resulting models.