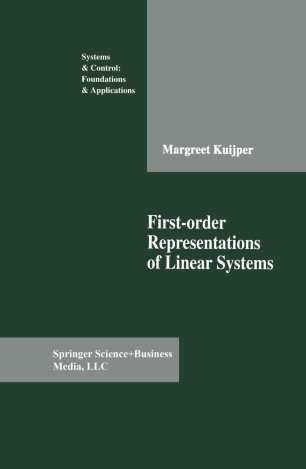 This book is about the theory of system representations. The systems that are considered are linear, time-invariant, deterministic and finite­ dimensional. The observation that some representations are more suitable for handling a particular problem than others motivates the study of rep­ resentations. In modeling a system, a representation often arises naturally from certain laws that underlie the system. In its most general form the representation then consists of dynamical equations for the system compo­ nents and of constraint equations reflecting the connection between these components. Depending on the particular problem that is to be inves­ tigated, it will sometimes be useful to rewrite the equations, that is, to transform the representation. For this reason it is of special importance to derive transformations that enable one to switch from one representation to another. A new approach of the past decade has been the so-called "behavioral ap­ proach" introduced by Willems. One of the main features of the behavioral approach is that it is well suited for modeling the interconnection of sys­ tems. It is for this reason that the behavioral approach is a natural choice in the context of modeling. In this book we adopt the behavioral approach: we define a system as a "behavior" , that is, a set of trajectories whose math­ ematical representation by means of differential or difference equations is nonunique. An aspect of this approach that is important in the context of representation theory is the fact that a natural type of equivalence arises.