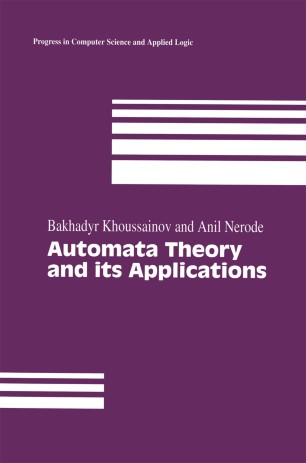 Automata Theory and its Applications

The theory of finite automata on finite stings, infinite strings, and trees has had a dis­ tinguished history. First, automata were introduced to represent idealized switching circuits augmented by unit delays. This was the period of Shannon, McCullouch and Pitts, and Howard Aiken, ending about 1950. Then in the 1950s there was the work of Kleene on representable events, of Myhill and Nerode on finite coset congruence relations on strings, of Rabin and Scott on power set automata. In the 1960s, there was the work of Btichi on automata on infinite strings and the second order theory of one successor, then Rabin's 1968 result on automata on infinite trees and the second order theory of two successors. The latter was a mystery until the introduction of forgetful determinacy games by Gurevich and Harrington in 1982. Each of these developments has successful and prospective applications in computer science. They should all be part of every computer scientist's toolbox. Suppose that we take a computer scientist's point of view. One can think of finite automata as the mathematical representation of programs that run us­ ing fixed finite resources. Then Btichi's SIS can be thought of as a theory of programs which run forever (like operating systems or banking systems) and are deterministic. Finally, Rabin's S2S is a theory of programs which run forever and are nondeterministic. Indeed many questions of verification can be decided in the decidable theories of these automata.