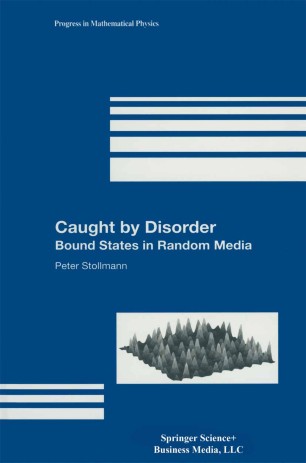 Disorder is one of the predominant topics in science today. The present text is devoted to the mathematical studyofsome particular cases ofdisordered systems. It deals with waves in disordered media. To understand the significance of the influence of disorder, let us start by describing the propagation of waves in a sufficiently ordered or regular environment. That they do in fact propagate is a basic experience that is verified by our senses; we hear sound (acoustic waves) see (electromagnetic waves) and use the fact that electromagnetic waves travel long distances in many aspects ofour daily lives. The discovery that disorder can suppress the transport properties of a medium is oneof the fundamental findings of physics. In its most prominent practical application, the semiconductor, it has revolutionized the technical progress in the past century. A lot of what we see in the world today depends on that relatively young device. The basic phenomenon of wave propagation in disordered media is called a metal-insulator transition: a disordered medium can exhibit good transport prop­ erties for waves ofrelatively high energy (like a metal) and suppress the propaga­ tion of waves of low energy (like an insulator). Here we are actually talking about quantum mechanical wave functions that are used to describe electronic transport properties. To give an initial idea of why such a phenomenon could occur, we have to recall that in physical theories waves are represented by solutions to certain partial differential equations. These equations link time derivatives to spatial derivatives.