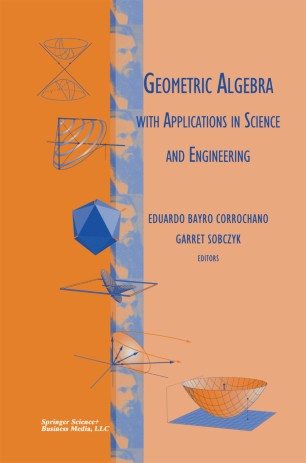 Geometric Algebra with Applications in Science and Engineering

The goal of this book is to present a unified mathematical treatment of diverse problems in mathematics, physics, computer science, and engineer­ ing using geometric algebra. Geometric algebra was invented by William Kingdon Clifford in 1878 as a unification and generalization of the works of Grassmann and Hamilton, which came more than a quarter of a century before. Whereas the algebras of Clifford and Grassmann are well known in advanced mathematics and physics, they have never made an impact in elementary textbooks where the vector algebra of Gibbs-Heaviside still predominates. The approach to Clifford algebra adopted in most of the ar­ ticles here was pioneered in the 1960s by David Hestenes. Later, together with Garret Sobczyk, he developed it into a unified language for math­ ematics and physics. Sobczyk first learned about the power of geometric algebra in classes in electrodynamics and relativity taught by Hestenes at Arizona State University from 1966 to 1967. He still vividly remembers a feeling of disbelief that the fundamental geometric product of vectors could have been left out of his undergraduate mathematics education. Geometric algebra provides a rich, general mathematical framework for the develop­ ment of multilinear algebra, projective and affine geometry, calculus on a manifold, the representation of Lie groups and Lie algebras, the use of the horosphere and many other areas. This book is addressed to a broad audience of applied mathematicians, physicists, computer scientists, and engineers.