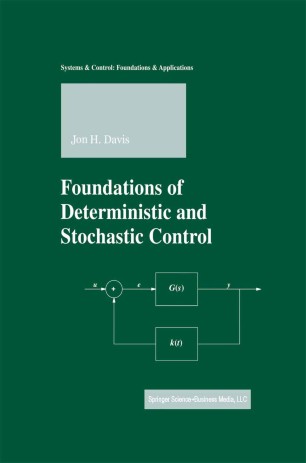 Foundations of Deterministic and Stochastic Control

Control theory has applications to a number of areas in engineering and communication theory. This introductory text on the subject is fairly self-contained, and consists of a wide range of topics that include realization problems, linear-quadratic optimal control, stability theory, stochastic modeling and recursive estimation algorithms in communications and control, and distributed system modeling. In the early chapters methods based on Wiener--Hopf integral equations are utilized. The fundamentals of both linear control systems as well as stochastic control are presented in a unique way so that the methods generalize to a useful class of distributed parameter and nonlinear system models. The control of distributed parameter systems (systems governed by PDEs) is based on the framework of linear quadratic Gaussian optimization problems. Additionally, the important notion of state space modeling of distributed systems is examined. Basic results due to Gohberg and Krein on convolution are given and many results are illustrated with some examples that carry throughout the text. The standard linear regulator problem is studied in the continuous and discrete time cases, followed by a discussion of (dual) filtering problems. Later chapters treat the stationary regulator and filtering problems using a Wiener--Hopf approach. This leads to spectral factorization problems and useful iterative algorithms that follow naturally from the methods employed. The interplay between time and frequency domain approaches is emphasized. "Foundations of Deterministic and Stochastic Control" is geared primarily towards advanced mathematics and engineering students in various disciplines.