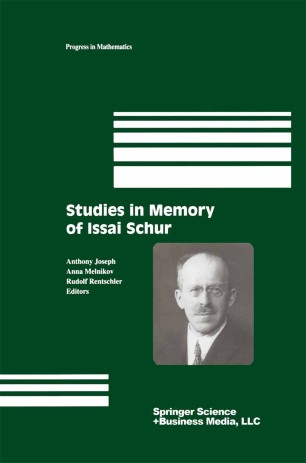 Studies in Memory of Issai Schur

Part of the Progress in Mathematics book series (PM, volume 210)

This volume Studies in Memory of Issai Schur was conceived as a tribute to Schur's of his tragic end. His impact on great contributions to mathematics and in remembrance of mathematicians Representation Theory alone was so great that a significant number of Researchers (TMR) Network, in the European Community Training and Mobility Orbits, Crystals and Representation Theory, in operation during the period (1997-2002) have been occupied with what has been called Schur theory. Consequently, this volume has the additional purpose of recording some of the significant results of the network. It was furthermore appropriate that invited contributors should be amongst the speakers at the Paris Midterm Workshop of the network held at Chevaleret during 21-25 May, 2000 as well as those of the Schur Memoriam Workshop held at the Weizmann Institute, Rehovot, during 27-31 December 2000. The latter marked the sixtieth anniversary of Schur's passing and took place in the 125th year of his birth.