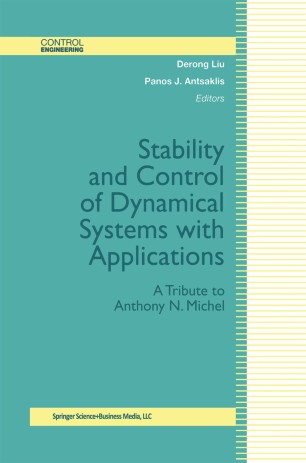 Stability and Control of Dynamical Systems with Applications

A Tribute to Anthony N. Michel

It is with great pleasure that I offer my reflections on Professor Anthony N. Michel's retirement from the University of Notre Dame. I have known Tony since 1984 when he joined the University of Notre Dame's faculty as Chair of the Depart­ ment of Electrical Engineering. Tony has had a long and outstanding career. As a researcher, he has made im­ portant contributions in several areas of systems theory and control theory, espe­ cially stability analysis of large-scale dynamical systems. The numerous awards he received from the professional societies, particularly the Institute of Electrical and Electronics Engineers (IEEE), are a testament to his accomplishments in research. He received the IEEE Control Systems Society's Best Transactions Paper Award (1978), and the IEEE Circuits and Systems Society's Guillemin-Cauer Prize Paper Award (1984) and Myril B. Reed Outstanding Paper Award (1993), among others. In addition, he was a Fulbright Scholar (1992) and received the Alexander von Hum­ boldt Forschungspreis (Alexander von Humboldt Research Award for Senior U.S. Scientists) from the German government (1997). To date, he has written eight books and published over 150 archival journal papers. Tony is also an effective administrator who inspires high academic standards.