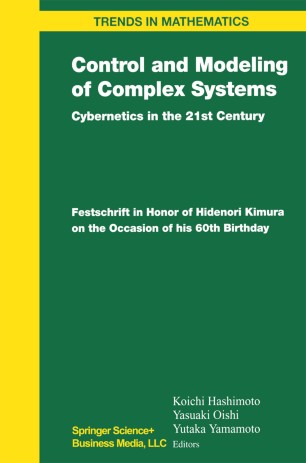 Control and Modeling of Complex Systems

Hidenori Kimura, renowned system and control theorist, turned 60 years of age in November, 2001. To celebrate this memorable occasion, his friends, collaborators, and former students gathered from all over the world and held a symposium in his honor on November 1 and 2, 2001, at the Sanjo Conference Hall at the University of Tokyo. Reflecting his current research interests, the symposium was entitled "Cybernetics in the 21st Century: Information and Complexity in Control Theory," and it drew nearly 150 attendees. There were twenty-five lectures, on which the present volume is based. Hidenori Kimura was born on November 3, 1941, in Tokyo, just prior to the outbreak of the Second World War. It is not hard to imagine, then, that his early days, like those of so many of his contemporaries, must have been difficult. Fortunately, the war ended in 1945, and his generation found itself thoroughly occupied with the rebuilding effort and with Japan's uphill journey in the last half-century. He entered the University of Tokyo in 1963, received a B. S. in 1965, an M. S. in 1967, and, in 1970, a Ph. D. degree for his dissertation "A Study of Differential Games. " After obtaining his doctorate, he joined the Department of Control En­ gineering at Osaka University as a research associate, and in 1973 he was promoted to an associate professor.