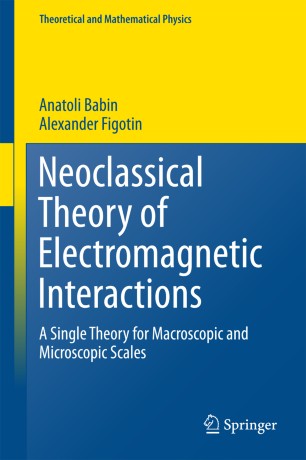 A Single Theory for Macroscopic and Microscopic Scales

In this monograph, the authors present their recently developed theory of electromagnetic interactions. This neoclassical approach extends the classical electromagnetic theory down to atomic scales and allows the explanation of various non-classical phenomena in the same framework.
While the classical Maxwell–Lorentz electromagnetism theory succeeds in describing the physical reality at macroscopic scales, it struggles at atomic scales. Here, quantum mechanics traditionally takes over to describe non-classical phenomena such as the hydrogen spectrum and de Broglie waves. By means of modifying the classical theory, the approach presented here is able to consistently explain quantum-mechanical effects, and while similar to quantum mechanics in some respects, this neoclassical theory also differs markedly from it. In particular, the newly developed framework omits probabilistic interpretations of the wave function and features a new fundamental spatial scale which, at the size of the free electron, is much larger than the classical electron radius and is relevant to plasmonics and emission physics.
This book will appeal to researchers interested in advanced aspects of electromagnetic theory. Treating the classical approach in detail, including non-relativistic aspects and the Lagrangian framework, and comparing the neoclassical theory with quantum mechanics and the de Broglie–Bohm theory, this work is completely self-contained.