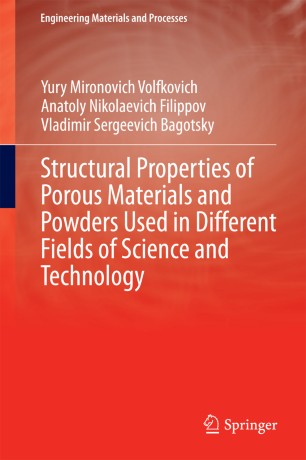 Part of the Engineering Materials and Processes book series (EMP)

This book provides a comprehensive and concise description of most important aspects of experimental and theoretical investigations of porous materials and powders, with the use and application of these materials in different fields of science, technology, national economy and environment. It allows the reader to understand the basic regularities of heat and mass transfer and adsorption occurring in qualitatively different porous materials and products, and allows the reader to optimize the functional properties of porous and powdered products and materials. Written in an straightforward and transparent manner, this book is accessible to both experts and those without specialist knowledge, and it is further elucidated by drawings, schemes and photographs.

Porous materials and powders with different pore sizes are used in many areas of industry, geology, agriculture and science. These areas include (i) a variety of devices and supplies; (ii) thermal insulation and building materials; (iii) oil-bearing geological, gas-bearing and water-bearing rocks; and (iv) biological objects. Structural Properties of Porous Materials and Powders Used in Different Fields of Science and Technology is intended for a wide-ranging audience specializing in different fields of science and engineering including engineers, geologists, geophysicists, oil and gas producers, agronomists, physiologists, pharmacists, researchers, teachers and students.

Dr.Sci. Yury M. Volfkovich at present is Principal Scientist at A.N. Frumkin Institute of Physical Chemistry and Electrochemistry, Russian Academy of Sciences, Moscow. His main areas of work during 50 years have been porosimetric methods, fuel cells, batteries, supercapacitors and electrochemical water purification. During 1970 - 1995 he participated in development of the fuel cells for the Soviet and Russian space programs. During 2003-2004, he worked as guest scientist at Axion Power Int. Co. and Porotech Ltd. (Toronto, Canada) as a head of laboratories of electrochemistry and porosimetry. He has developed a new porosimetric method – Method of Standard Contact Porosimetry and corresponding Porosimeter. At present this porosimeter is producing by Porotech Ltd. He is author of the two monographs: I.G. Gurevich, Yu.M. Volfkovich, V.S. Bagotsky, "Macrokinetics of Porous Electrodes", Minsk, 1974 (in Russian) and Yu. M. Volfkovich, T.M. Sedyuk, Electrochemical capacitors. In book: Reference book on Power Sources, Moscow, 2003 (in Russian). He is author more of 400 papers in scientific journals (Colloid and Surfaces, Advanced Materials, Electrochimica Acta, J.of Electrochemical Society, J. of Power Sources, J. of Applied Electrochemistry, Polymer Communications, Membrane Science, Russian Journal of Electrochemistry, etc.) and 30 patents.

Dr.Sci. Vladimir S. Bagotsky passed away on November 12, 2012 at the age of 92. Between 1949 and 1965 Vladimir Bagotsky worked at the All-Union Research Institute of Power Sources in Moscow. He was a head of laboratory which developed the batteries for spacecrafts (mostly high capacity silver-zinc and mercury-zinc). Starting from 1960 V. Bagotsky became a leader of the fuel cell development in the Soviet Union and from 1980 he supervised the Russian R&D related to lithium batteries. Since 1965 to 1985 before moving to the USA, Bagotsky worked at Institute of Electrochemistry of the Russian Academy of Sciences as a head of the power sources division. Basic aspects of electrochemical energy conversion addressed by Bagotsky and his co-workers in this Institute are related to electrocatalysis, electrode kinetics on porous electrodes, and electrochemical intercalation. During his scientific career V.S.Bagotsky has authored more than 400 papers in scientific journals (Electrochimica Acta, J.of Electroanalytical.Chemistry, J. of Power Sources, Russian Journal of Electrochemistry, etc.) and six monographs. The first was “Kinetics of Electrode Processes” (1952) published together with A.N.Frumkin, Z.A.Iofa and B.N.Kabanov in Russian and available in English as NBS translation. Already in XXI century, during his USA period, he published “Fundamentals of Electrochemistry” (Wiley, 2006) and the treatise “Fuel Cells: Problems and Solutions” (Wiley, 2009)”. Up to his last days Professor Bagotsky has been working on present book.