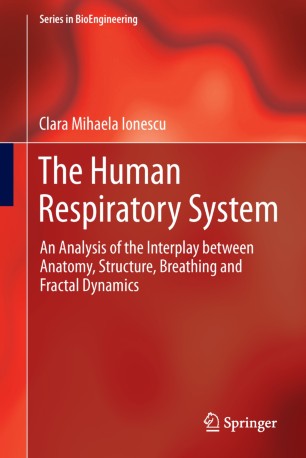 An Analysis of the Interplay between Anatomy, Structure, Breathing and Fractal Dynamics

Part of the Series in BioEngineering book series (SERBIOENG)

The Human Respiratory System combines emerging ideas from biology and mathematics to show the reader how to produce models for the development of biomedical engineering applications associated with the lungs and airways. Mathematically mature but in its infancy as far as engineering uses are concerned, fractional calculus is the basis of the methods chosen for system analysis and modelling. This reflects two decades’ worth of conceptual development which is now suitable for bringing to bear in biomedical engineering.

The text reveals the latest trends in modelling and identification of human respiratory parameters with a view to developing diagnosis and monitoring technologies. Of special interest is the notion of fractal structure which is indicative of the large-scale biological efficiency of the pulmonary system. The related idea of fractal dimension represents the adaptations in fractal structure caused by environmental factors, notably including disease. These basics are linked to model the dynamical patterns of breathing as a whole.

The ideas presented in the book are validated using real data generated from healthy subjects and respiratory patients and rest on non-invasive measurement methods.

The Human Respiratory System will be of interest to applied mathematicians studying the modelling of biological systems, to clinicians with interests outside the traditional borders of medicine, and to engineers working with technologies of either direct medical significance or for mitigating changes in the respiratory system caused by, for example, high-altitude or deep-sea environments.