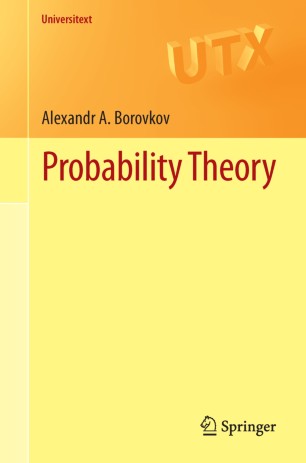 Probability theory is an actively developing branch of mathematics. It has applications in many areas of science and technology and forms the basis of mathematical statistics. This self-contained, comprehensive book tackles the principal problems and advanced questions of probability theory and random processes in 22 chapters, presented in a logical order but also suitable for dipping into. They include both classical and more recent results, such as large deviations theory, factorization identities, information theory, stochastic recursive sequences. The book is further distinguished by the inclusion of clear and illustrative proofs of the fundamental results that comprise many methodological improvements aimed at simplifying the arguments and making them more transparent.

The importance of the Russian school in the development of probability theory has long been recognized. This book is the translation of the fifth edition of the highly successful and esteemed Russian textbook. This edition includes a number of new sections, such as a new chapter on large deviation theory for random walks, which are of both theoretical and applied interest. The frequent references to Russian literature throughout this work lend a fresh dimension and makes it an invaluable source of reference for Western researchers and advanced students in probability related subjects.

Professor Alexandr Borovkov lives and works in the Novosibirsk Academy Town in Russia and is affiliated with both the Sobolev Institute of Mathematics of the Russian Academy of Sciences and the Novosibirsk State University. He is one of the most prominent Russian specialists in probability theory and mathematical statistics. Alexandr Borovkov authored and co-authored more than 200 research papers and ten research monographs and advanced level university textbooks. His contributions to mathematics and its applications are widely recognized, which included election to the Russian Academy of Sciences and several prestigious awards for his research and textbooks.