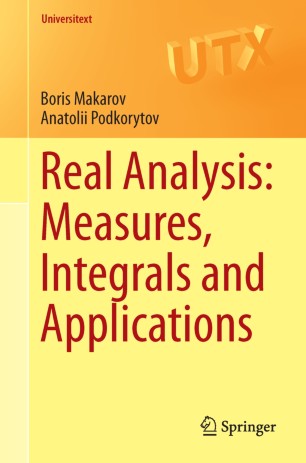 Real Analysis: Measures, Integrals and Applications is devoted to the basics of integration theory and its related topics. The main emphasis is made on the properties of the Lebesgue integral and various applications both classical and those rarely covered in literature.

This book provides a detailed introduction to Lebesgue measure and integration as well as the classical results concerning integrals of multivariable functions. It examines the concept of the Hausdorff measure, the properties of the area on smooth and Lipschitz surfaces, the divergence formula, and Laplace's method for finding the asymptotic behavior of integrals. The general theory is then applied to harmonic analysis, geometry, and topology. Preliminaries are provided on probability theory, including the study of the Rademacher functions as a sequence of independent random variables.

The book contains more than 600 examples and exercises. The reader who has mastered the first third of the book will be able to study other areas of mathematics that use integration, such as probability theory, statistics, functional analysis, partial probability theory, statistics, functional analysis, partial differential equations and others.

Real Analysis: Measures, Integrals and Applications is intended for advanced undergraduate and graduate students in mathematics and physics. It assumes that the reader is familiar with basic linear algebra and differential calculus of functions of several variables.