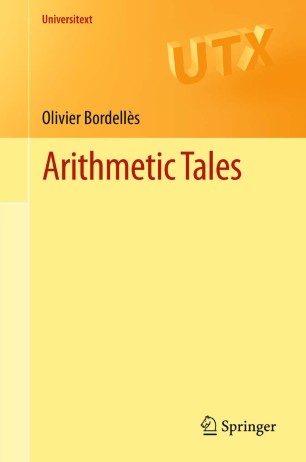 Number theory was once famously labeled the queen of mathematics by Gauss. The multiplicative structure of the integers in particular deals with many fascinating problems some of which are easy to understand but very difficult to solve.  In the past, a variety of very different techniques has been applied to further its understanding.

Classical methods in analytic theory such as Mertens’ theorem and Chebyshev’s inequalities and the celebrated Prime Number Theorem give estimates for the distribution of prime numbers. Later on, multiplicative structure of integers leads to  multiplicative arithmetical functions for which there are many important examples in number theory. Their theory involves the Dirichlet convolution product which arises with the inclusion of several summation techniques and a survey of classical results such as Hall and Tenenbaum’s theorem and the Möbius Inversion Formula. Another topic is the counting integer points close to smooth curves and its relation to the distribution of squarefree numbers, which is rarely covered in existing texts. Final chapters focus on exponential sums and algebraic number fields. A number of exercises at varying levels are also included.

Topics in Multiplicative Number Theory introduces offers a comprehensive introduction into these topics with an emphasis on analytic number theory. Since it requires very little technical expertise it  will appeal to a wide target group including upper level undergraduates, doctoral and masters level students.