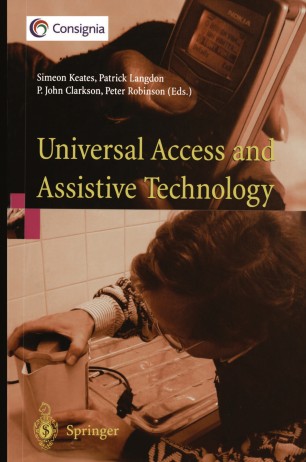 Proceedings of the Cambridge Workshop on UA and AT ’02

The first Cambridge Workshop on Universal Access and Assistive Technology (CWUAAT) was held at Trinity Hall, Cambridge, in March 2002. It was inspired by the earlier, highly successful Cambridge Workshops on Rehabilitation Robotics organised by the late Robin Jackson. Robin was the founder of Rehabilitation Research at Cambridge which now continues in the Engineering Design Centre within the Department of Engineering, led by John Clarkson and Simeon Keates, and in the Rainbow Group within the Computer Laboratory led by Peter Robinson. CWUAAT represents the first in a new series of workshops that we are aiming to hold every two years which, reflecting the spirit of recent moves to extend the rights for universal accessibility, will encourage discussion of a broad range of interests. There will be a general focus on product/solution development. Hence it is intended that the principal requirements for the successful design of assistive technology shall be addressed, where these range from the identification and capture of the needs of the users, through to the development and evaluation of truly usable and accessible systems for users with special needs. The best submissions received for the first CWUAAT are contained in this book, where the contributors are all leading researchers in the fields of Universal Access and Assistive Technology and represent a large part of the international research community. They include, though not exclusively, computer scientists, designers, engineers, industrial representatives, ergonomists and sociologists.