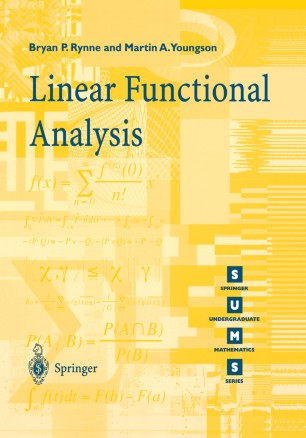 This introduction to the ideas and methods of linear functional analysis shows how familiar and useful concepts from finite-dimensional linear algebra can be extended or generalized to infinite-dimensional spaces. Aimed at advanced undergraduates in mathematics and physics, the book assumes a standard background of linear algebra, real analysis (including the theory of metric spaces), and Lebesgue integration, although an introductory chapter summarizes the requisite material.

The initial chapters develop the theory of infinite-dimensional normed spaces, in particular Hilbert spaces, after which the emphasis shifts to studying operators between such spaces. Functional analysis has applications to a vast range of areas of mathematics; the final chapters discuss the particularly important areas of integral and differential equations.

Further highlights of the second edition include:

a new chapter on the Hahn–Banach theorem and its applications to the theory of duality. This chapter also introduces the basic properties of projection operators on Banach spaces, and weak convergence of sequences in Banach spaces - topics that have applications to both linear and nonlinear functional analysis;

plenty of exercises, with solutions provided at the back of the book.

Praise for the first edition:

"The authors write with a strong narrative thrust and a sensitive appreciation of the needs of the average student so that, by the final chapter, there is a real feeling of having 'gotten somewhere worth getting' by a sensibly paced, clearly signposted route." Mathematical Gazette

"It is a fine book, with material well-organized and well-presented. A particularly useful feature is the material on compact operators and applications to differential equations." CHOICE