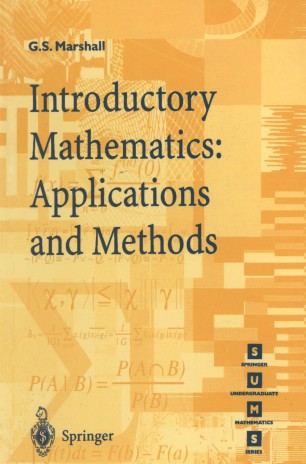 This book is aimed at undergraduate students embarking on the first year of a modular mathematics degree course. It is a self-contained textbook making it ideally suited to distance learning and a useful reference source for courses with the traditional lecture/tutorial structure. The theoretical content is firmly based but the principal focus is on techniques and applications. The important aims and objectives are presented clearly and then reinforced using complete worked solutions within the text. There is a natural increase in difficulty and understanding as each chapter progresses, always building upon the basic elements. It is assumed that the reader has studied elementary calculus at Advanced level and is at least familiar with the concept of function and has been exposed to basic differentiation and integration techniques. Although these are covered in the book they are presented as a refresher course to jog the student's memory rather than to introduce the topic for the first time. The early chapters cover the topics of matrix algebra, vector algebra and com­ plex numbers in sufficient depth for the student to feel comfortable -when they reappear later in the book. Subsequent chapters then build upon the student's 'A' level knowledge in the area of real variable calculus, including partial differentiation and mUltiple inte­ grals. The concluding chapter on differential equations motivates the student's learning by consideration of applications taken from both physical and eco­ nomic contexts.