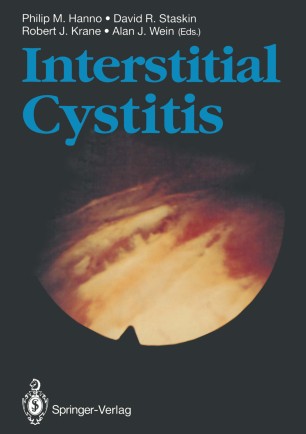 Until recently interstitial cystitis was considered a urologic curiosity, a rare problem with relatively specific diagnostic criteria that many urologists would see only once or twice in a decade. This has changed drastically in the last ten years. Interstitial cystitis is now a very controversial subject that has ignited the interest of physicians in general, urologists in particular, basic scientists and even government agencies. It is a potentially much more common and more devastating disorder (or group of disorders) than had been believed. The exponential growth in clinical and basic research is largely due to the efforts of patient groups who demanded that more attention be paid to this problem. We owe them a debt of gratitude for putting interstitial cystitis in the spotlight and quite literally under the microscope. In this book we have attempted to put together the current views of experts from around the world regarding the many aspects of this disorder. It is hoped that we can provide an image of where we stand as we enter the 1990s. If the book can stimulate other physicians and basic scientists to enter this exciting field of research, and if it can provide hope to the many thousands of patients who suffer from this disease, we will consider it a success. Acknowledgement This book is dedicated to the Interstitial Cystitis Association and its hundreds of members who have contributed so much of their time and effort toward making this disease less of a mystery.