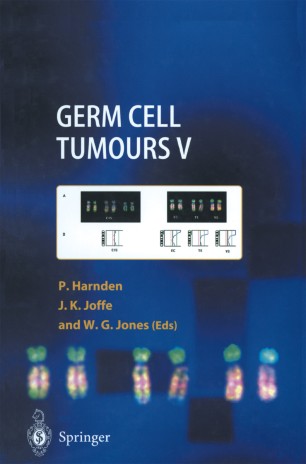 The events of September 11,2001 in the United States will always be r~membered with horror and sadness but also admiration for those who risked, and often lost, their lives attempting to save others. When the Fifth International Germ Cell Tumour Conference began, the US air space was closed and our American friends were unable to join us. We were faced with a programme that now had many gaps. What happened next was an illustration of the sense of community that prevails at the Germ Cell Tumour Conferences. Some of those who could not be there in person, such as Richard Foster and Craig Nichols, sent their slides by email, and we were indebted to those, such as Michael Jewett, Ben Mead and Malcolm Mason, who stepped into the breach to present them. Others gave impromptu, and often thought provoking, talks. The discussion periods were lively and it will come as no surprise to those who regularly attend the meeting that Tim Oliver won the prize for "Most Questions Asked", managing even to ask questions following his own presentations. The quality of the talks was outstanding. There was closer integration of the adult and paediatric sessions than in previous meetings. As a result, the differences and similarities between adult male, female and paediatric germ cell tumours became more apparent. This cross-fertilization of ideas from different groups will no doubt lead to further advances. As a result of all these efforts, the conference was a great success.