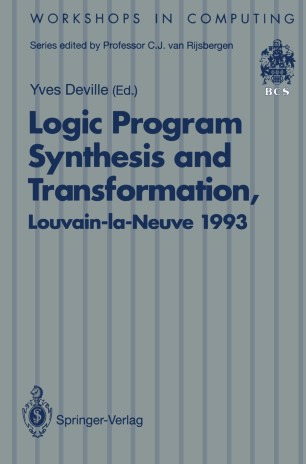 This volume contains extended versions of papers presented at the Third International Workshop on Logic Program Synthesis and Transformation (LOPSTR 93) held in Louvain-la-Neuve in July 1993. Much of the success of the workshop is due to Yves Deville who served as Organizer and Chair. Many people believe that machine support for the development and evolution of software will play a critical role in future software engineering environments. Machine support requires the formalization of the artifacts and processes that arise during the software lifecycle. Logic languages are unique in providing a uniform declarative notation for precisely describing application domains, software requirements, and for prescribing behavior via logic programs. Program synthesis and transfonnation techniques formalize the process of developing correct and efficient programs from requirement specifications. The natural intersection of these two fields of research has been the focus of the LOPSTR workshops. The papers in this volume address many aspects of software develop­ ment including: deductive synthesis, inductive synthesis, transforma­ tions for optimizing programs and exploiting parallelism, program analysis techniques (particularly via abstract interpretation), meta­ programming languages and tool support, and various extensions to Prolog-like languages, admitting non-Horn clauses, functions, and constraints. Despite the progress represented in this volume, the transition from laboratory to practice is fraught with difficulties.