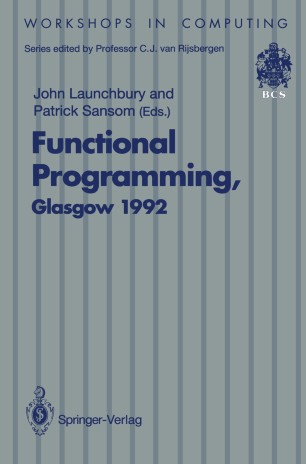 The Glasgow Functional Programming Group is widely recognised for its research in lazy functional languages. Once again this year, for the fifth time, we retreated to a Scottish seaside town to discuss our latest work, this time spending three days in Ayr. We were joined by a number of colleagues from other universities and from industry, with whom we have been enjoying fruitful collaboration. The workshop serves the dual purpose of ensuring that the whole group remains informed of each other's work, and of providing workshop experience for research students. Most participants presented a short talk about their work, supplemented by papers which appeared in a draft proceedings distributed at the workshop. Since then the papers have been reviewed and the majority are now published here following revision. The workshop also contained a lively discussion session on functional language applications, to which the industrial participants made very helpful contributions. One interesting feature of this volume is the number of papers addressing practical issues of realistic use of functional languages, from benchmarking and profiling, to user interfaces and file handling. It is perhaps indicative that at last lazy functional languages are being used for significantly larger applications than has been typical in the past. This type of paper is likely to feature prominently in relevant conference proceedings for the next few years. Other papers here continue to address more theoretical topics, such as program logic, semantics of non­ determinism, program analysis, and loop detection.