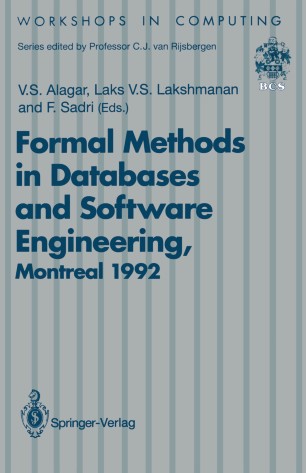 Proceedings of the Workshop on Formal Methods in Databases and Software Engineering, Montreal, Canada, 15–16 May 1992

Logic and object-orientation have come to be recognized as being among the most powerful paradigms for modeling information systems. The term "information systems" is used here in a very general context to denote database systems, software development systems, knowledge­ base systems, proof support systems, distributed systems and reactive systems. One of the most vigorously researched topics common to all information systems is "formal modeling". An elegant high-level abstraction applicable to both application domain and system domain concepts will always lead to a system design from "outside in"; that is, the aggregation of ideas is around real-life objects about which the system is to be designed. Formal methods \yhen applied with this view in mind, especially during early stages of system development, can lead to a formal reasoning on the intended properties, thus revealing system flaws that might otherwise be discovered much later. Logic in different styles and semantics is being used to model databases and their transactions; it is also used to specify concurrent, distributed, real-time, and reactive systems. ,The notion of "object" is central to the modeling of object­ oriented databases, as well as object-oriented design and programs in software engineering. Both database and software engineering communities have undoubtedly made important contributions to formalisms based on logic and objects. It is worthwhile bringing together the ideas developed by the two communities in isolation, and focusing on integrating their common strengths.