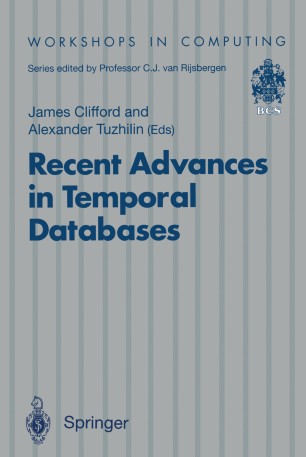 The International Workshop on Temporal Databases held in Zurich, Switzerland, 17-18 September 1995 brought together researchers from academic and industrial institutions with database practitioners interested in keeping up with the state-of-the-art developments in the management of temporal data. A previous workshop in Arlington, Texas in June 1993 focused on the development of an infrastructure that would spur the development of commercial implementations of many of the generally agreed-upon features of temporal database management that have emerged from the temporal database research community over more than a decade of research. This ARP AlNSF-sponsored Arlington workshop saw the formation of the TSQL2 Language Design Committee, which led to the development of the recently completed TSQL2 Language Specification, and also created a "consensus" glossary of temporal database terminology and a test suite of temporal database queries. The Zurich workshop was conceived from the outset to be universal in scope, and international in participation. The Call for Papers sought to evoke the highest quality and most up-to-date temporal database research from around the world. Mindful of the important work accomplished by the previous workshop, the Call also specifically sought out research papers and panels that would comment and build upon the widely publicized results from Arlington. These proceedings contain the papers that were selected for presentation at the International Workshop, on Temporal Databases held in Zurich, Switzerland on 17-18 September 1995.