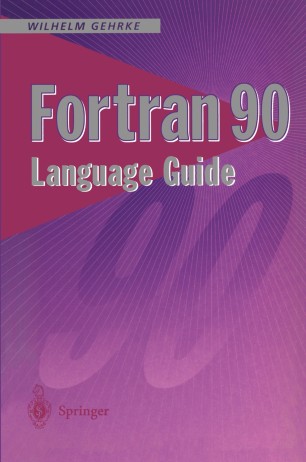 PREFACE The FORTRAN programming language was designed in the 1950s and standardized in 1966. That version of the language was later called FORTRAN 66. FORTRAN 66 quickly developed into the most important programming language for the development of engineering and scientific applications. In 1978, the language was redesigned and standardized again and called FORTRAN 77. However, this FORTRAN version was not yet a modern language as far as software engineering and programming methodology were concerned. In 1991, a new version of the language was standardized. Its name is Fortran 90. This version is a powerful tool, in fact it is closer to the state of the art of high level problem oriented programming languages than other famous languages that are used for the same area of application. The next revision of the language is planned for 1995; it will be a minor revision of Fortran 90. The next major language revision is planned for the year 2000. This "Fortran90 Language Guide" is a comprehensible description of the com­ plete Fortran 90 programming language as it is defined in the standard docu­ ment [1]. It is already in accordance with the two corrigenda [2] [3] of the standard document. The standard document is a reference book for compiler writers and those experts who already know all about Fortran 90, but it is use­ less for beginners and rather impractical even for experienced programmers.