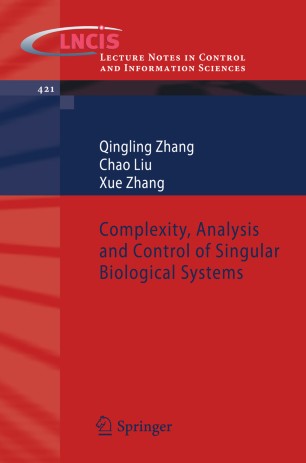 Complexity, Analysis and Control of Singular Biological Systems follows the control of real-world biological systems at both ecological and phyisological levels concentrating on the application of now-extensively-investigated singular system theory. Much effort has recently been dedicated to the modelling and analysis of developing bioeconomic systems and the text establishes singular examples of these, showing how proper control can help to maintain sustainable economic development of biological resources.
The book begins from the essentials of singular systems theory and bifurcations before tackling  the use of various forms of control in singular biological systems using examples including predator-prey relationships and viral vaccination and quarantine control. Researchers and graduate students studying the control of complex biological systems are shown how a variety of methods can be brought to bear and practitioners working with the economics of biological systems and their control will also find the monograph illuminating.