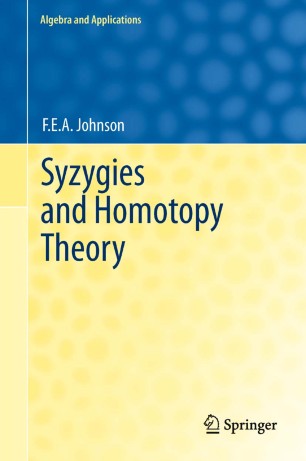 Part of the Algebra and Applications book series (AA, volume 17)

Syzygies and Homotopy Theory explores the problem of nonsimply connected homotopy in the first nontrivial cases and presents, for the first time, a systematic rehabilitation of Hilbert's method of syzygies in the context of non-simply connected homotopy theory. The first part of the book is theoretical, formulated to allow a general finitely presented group as a fundamental group. The innovation here is to regard syzygies as stable modules rather than minimal modules. Inevitably this forces a reconsideration of the problems of noncancellation; these are confronted in the second, practical, part of the book. In particular, the second part of the book considers how the theory works out in detail for the specific examples Fn ´F where Fn is a free group of rank n and F is finite. Another innovation is to parametrize the first syzygy in terms of the more familiar class of stably free modules. Furthermore, detailed description of these stably free modules is effected by a suitable modification of the method of Milnor squares.

The theory developed within this book has potential applications in various branches of algebra, including homological algebra, ring theory and K-theory. Syzygies and Homotopy Theory will be of interest to researchers and also to graduate students with a background in algebra and algebraic topology.