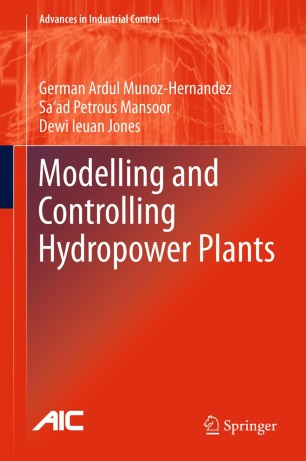 Hydroelectric power stations are a major source of electricity around the world; understanding their dynamics is crucial to achieving good performance.  Modelling and Controlling Hydropower Plants discusses practical and well-documented cases of modelling and controlling hydropower station modelling and control, focussing on a pumped storage scheme based in Dinorwig, North Wales.  Single-input-single-output and multiple-input-multiple-output models, which cover the linear and nonlinear characteristics of pump-storage hydroelectric power stations, are reviewed. The most important dynamic features are discussed, and the verification of these models by hardware in the loop simulation is described. To show how the performance of a pump-storage hydroelectric power station can be improved, classical and modern controllers are applied to simulated models of the Dinorwig power plant. These include PID, fuzzy approximation, feed-forward and model-based predictive control with linear and hybrid prediction models.

Modelling and Controlling Hydropower Plants will be of value to control engineers working in industry. In addition, the theoretical treatment of modern and classic controllers will be useful for academic researchers and graduate students in control and power engineering.