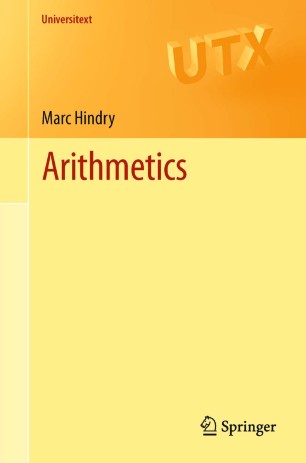 Number theory is a branch of mathematics which draws its vitality from a rich historical background. It is also traditionally nourished through interactions with other areas of research, such as algebra, algebraic geometry, topology, complex analysis and harmonic analysis. More recently, it has made a spectacular appearance in the field of theoretical computer science and in questions of communication, cryptography and error-correcting codes.

Providing an elementary introduction to the central topics in number theory, this book spans multiple areas of research. The first part corresponds to an advanced undergraduate course. All of the statements given in this part are of course accompanied by their proofs, with perhaps the exception of some results appearing at the end of the chapters. A copious list of exercises, of varying difficulty, are also included here. The second part is of a higher level and is relevant for the first year of graduate school. It contains an introduction to elliptic curves and a chapter entitled “Developments and Open Problems”, which introduces and brings together various themes oriented toward ongoing mathematical research.

Given the multifaceted nature of number theory, the primary aims of this book are to:
- provide an overview of the various forms of mathematics useful for studying numbers
- demonstrate the necessity of deep and classical themes such as Gauss sums
- highlight the role that arithmetic plays in modern applied mathematics
- include recent proofs such as the polynomial primality algorithm
- approach subjects of contemporary research such as elliptic curves
- illustrate the beauty of arithmetic

The prerequisites for this text are undergraduate level algebra and a little topology of Rn. It will be of use to undergraduates, graduates and phd students, and may also appeal to professional mathematicians as a reference text.