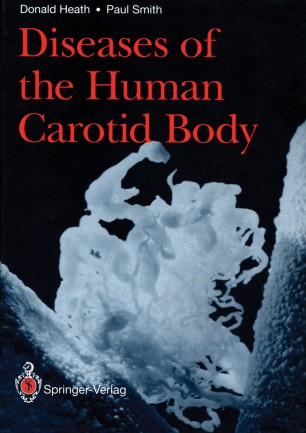 Diseases of the Human Carotid Body

Ever since its discovery in 1742 the carotid body has remained an organ of mystery. Originally described as a ganglion, it was subsequently regarded as a gland, chromaffin paraganglion and non-chromaffin paraganglion. In 1928 it was shown to be a chemoreceptor with close associations with the function of baroreception in the adjacent carotid sinus and perhaps within its own substance. These discoveries led physiologists to embark on a series of elegant experimental studies on a number of animal species which have, however, so far failed to identify the transducer for detection of changes in tension of arterial blood gases or the mechanism of chemor­ eception. Pathologists on the other hand have largely ignored the carotid body, restricting their interest to its tumour, the chemodectoma. A remarkable disparity in knowledge of the organ has resulted, with most information being available on the physiology of chemoreceptor tissue in laboratory animals. In contrast, there has been sparse interest and awareness of the pathology in man of this nodule of tissue lying in the carotid bifurcation whose functional activity is suggested by the high blood flow it receives, and its rich content of biogenic amines and a wide variety of peptides. This book is an attempt to redress this unsatisfactory situation. During the last few years our understanding of the detailed histology and ultrastructure of the human carotid body has improved.