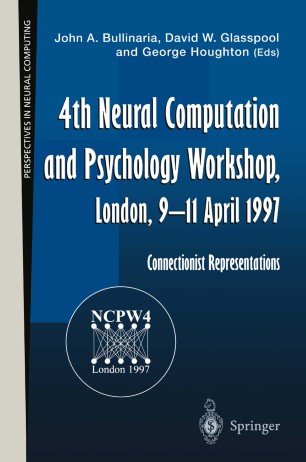 This volume collects together refereed versions of twenty-five papers presented at the 4th Neural Computation and Psychology Workshop, held at University College London in April 1997. The "NCPW" workshop series is now well established as a lively forum which brings together researchers from such diverse disciplines as artificial intelligence, mathematics, cognitive science, computer science, neurobiology, philosophy and psychology to discuss their work on connectionist modelling in psychology. The general theme of this fourth workshop in the series was "Connectionist Repre­ sentations", a topic which not only attracted participants from all these fields, but from allover the world as well. From the point of view of the conference organisers focusing on representational issues had the advantage that it immediately involved researchers from all branches of neural computation. Being so central both to psychology and to connectionist modelling, it is one area about which everyone in the field has their own strong views, and the diversity and quality of the presentations and, just as importantly, the discussion which followed them, certainly attested to this.