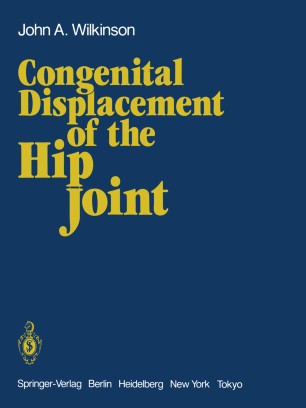 Congenital Displacement of the Hip Joint

If I have seen further, it is by standing on ye shoulders of giants. Sir Isaac Newton (1675) Although congenital displacement of the hip has always been recognised as the commonest pre-natal deformity of the musculoskeletal system found in otherwise normal children, it is surprising to find that much of our present-day understanding concerning its origin and nature has been discovered only in the past 150 years and its successful management eventu­ ally emerged during the last 60 years, almost within the professional life time of our more senior colleagues. Whereas Hippocrates (460-370 B. C. ) appeared to recognise patients that had experienced dislocation of their hips in utero and identified them from acquired forms of displacement, according to Severin (1941) it was another 2000 years before Palleta (1820) first recorded a careful description of the deformity based on his observations at an autopsy performed on an II-day-old boy with bilateral dislocations; he concluded that the findings were not caused by injury at birth, but dated from a pre-natal stage. Soon after, Baron Dupuytren (1847) gave an accurate description of congenital dislocation in his contribution entitled "Memoire sur un deplacement original ou congenital de la tete des femurs". He noted the absence of abscesses and fistulae as seen in painful and cruel pathological dislocations, which led him to believe that these congenital displacements were not likely to be the result of foetal disease as the affected babies appeared quite healthy at birth.