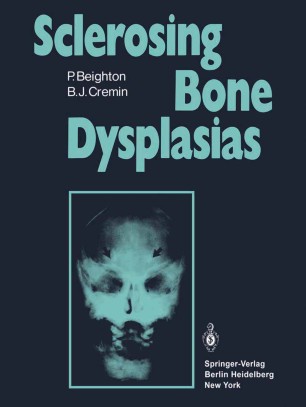 Much confusion exists in the accurate identification and classification of the many disorders in infancy which affect the skeleton by producing sclerosing lesions throughout the entire skeleton or in selected areas. A scholarly effort to bring order into this confusing field must be welcomed. Professors Beighton and Cremin have skillfully defined the problem and concisely yet thoroughly have identified the various sclerosing dysplasias. They bring to this task a wealth of clinical experience in their many years in the Departments of Radiology at the University of Cape Town Medical School and the Groote Schuur and Red Cross Children's Hospitals in Cape Town, South Africa. The authors also have had available data from the University of Cape Town Skeletal Dysplasia Registry. Professors Beighton and Cremin have used as a basis for their treatise the Paris Nomenclature (the modified version of 1977). This monograph is a felicitous combination of a working atlas and a scholarly exposition of the various sclerosing bone dysplasias, considering in detail eighteen major entities adopted from the Paris classification. Other disorders which present with osteosclerosis are also described. These include Caffey disease, oculodento-osseous dysplasia, central osteosclerosis with bamboo hair, fluorosis, osteosclerosis associated with renal disease and mastocytosis.