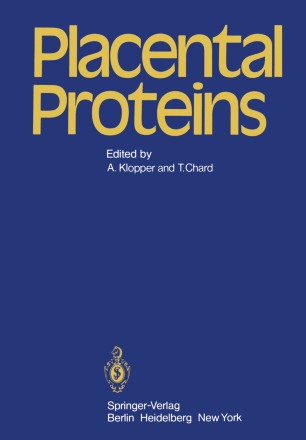 In July 1978 a group met in Aberdeen to discuss the whole range of new proteins recently isolated from the human placenta. With the exception of Yuri Tatarinov all the main pioneers in the field were present, and this book arose from the discussions which took place. Each author was asked to bring a written man­ uscript corresponding to but not necessarily identical with their verbal presentation. Nobody was given a specified remit, for the reason that the subject is so new that it would be impossible to design the meeting or the book in advance. Each speaker was left free to put on display whatever he thought was interesting or important about the newly isolated proteins. Inevitably this has led to much overlap, since everybody tends to follow the same path at first. Nevertheless, we shall probably never achieve so much agreement again. Only Vernon Stevens was set a fixed title out­ side the immediate field of new placental proteins. This arose from the very exciting possibility that the new proteins could be used to induce an autoimmune state to products of conception and thus serve as the basis for a new method of contraception. There are few findings at present which bear specifically on this proposal, but the experience of Vernon Stevens with hCG could serve as a model of the problems that might be encountered with SP and PAPP-A.