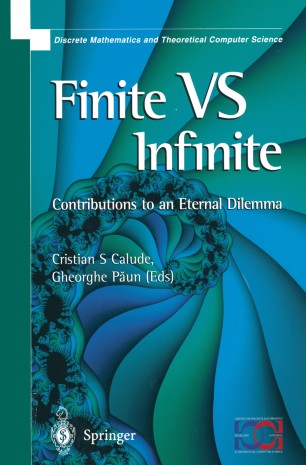 Contributions to an Eternal Dilemma

The finite - infinite interplay is central in human thinking, from ancient philosophers and mathematicians (Zeno, Pythagoras), to modern mathe­ matics (Cantor, Hilbert) and computer science (Turing, Godel). Recent developments in mathematics and computer science suggest a) radically new answers to classical questions (e. g. , does infinity exist?, where does infinity come from?, how to reconcile the finiteness of the human brain with the infinity of ideas it produces?), b) new questions of debate (e. g. , what is the role played by randomness?, are computers capable of handling the infinity through unconventional media of computation?, how can one approximate efficiently the finite by the infinite and, conversely, the infinite by finite?). Distinguished authors from around the world, many of them architects of the mathematics and computer science for the new century, contribute to the volume. Papers are as varied as Professor Marcus' activity, to whom this volume is dedicated. They range from real analysis to DNA com­ puting, from linguistics to logic, from combinatorics on words to symbolic dynamics, from automata theory to geography, and so on, plus an incursion into the old history of conceptions about infinity and a list of philosophical "open problems". They are mainly mathematical and theoretical computer science texts, but not all of them are purely mathematical.