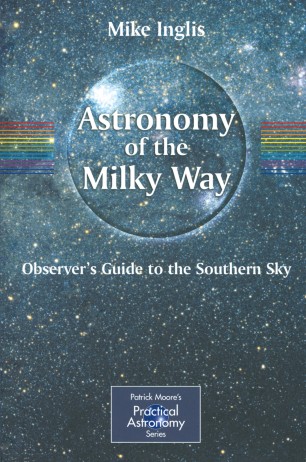 Astronomy of the Milky Way

The Observer’s Guide to the Southern Milky Way

One of the wonders of the universe we live in is the Milky Way. It spans the entire sky and can be seen every night of the year from anywhere on Earth. This is the first book that deals specifically with what can be seen within the Milky Way from a practical observer's point of view. Astronomy of the Milky Way covers every constellation that the Milky Way passes through, and describes in detail the many objects that can be found therein, including stars, double and multiple stars, emission nebulae, planetary nebulae, dark nebulae and supernovae remnants, open and galactic clusters, and galaxies. It also describes the one thing that is often left out of observing guides - the amazing star clouds of the Milky Way itself. It is one of a two-volume set that deal with the entire Milky Way - this second volume looks at what can be seen predominantly from the Southern skies In addition to the descriptive text there are many star charts and maps, as well as the latest up-to-date images made by observatories around the world and in space, as well as images taken by amateur astronomers. Equipped with this book, an amateur astronomer can go out on any clear night of the year and observe the galaxy we live in - The Milky Way.