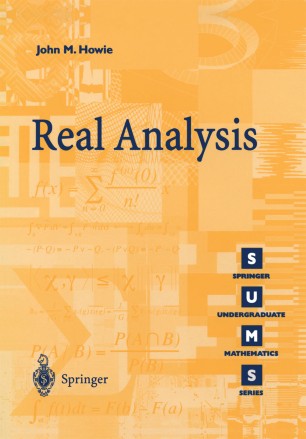 From the point of view of strict logic, a rigorous course on real analysis should precede a course on calculus. Strict logic, is, however, overruled by both history and practicality. Historically, calculus, with its origins in the 17th century, came first, and made rapid progress on the basis of informal intuition. Not until well through the 19th century was it possible to claim that the edifice was constructed on sound logical foundations. As for practicality, every university teacher knows that students are not ready for even a semi-rigorous course on analysis until they have acquired the intuitions and the sheer technical skills that come from a traditional calculus course. 1 Real analysis, I have always thought, is the pons asinorv.m of modern mathematics. This shows, I suppose, how much progress we have made in two thousand years, for it is a great deal more sophisticated than the Theorem of Pythagoras, which once received that title. All who have taught the subject know how patient one has to be, for the ideas take root gradually, even in students of good ability. This is not too surprising, since it took more than two centuries for calculus to evolve into what we now call analysis, and even a gifted student, guided by an expert teacher, cannot be expected to grasp all of the issues immediately.