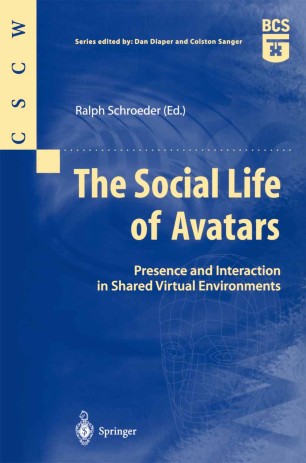 The Social Life of Avatars

Virtual reality (VR) technology has been developed commercially since the early 1990s [1]. Yet it is only with the growth of the Internet and other high-bandwidth links that VR systems have increasingly become networked to allow users to share the same virtual environment (VE). Shared YEs raise a number of interesting questions: what is the difference between face-to-face interaction and interaction between persons inside YEs? How does the appearance of the "avatar" - as the graphical representation of the user has become known - change the nature of interaction? And what governs the formation of virtual communities? This volume brings together contributions from social scientists and computer scientists who have conducted research on social interaction in various types of YEs. Two previous volumes in this CSCW book series [2, 3] have examined related aspects of research on YEs - social navigation and collaboration - although they do not always deal with VRIVEs in the sense that it is used here (see the definition in Chapter 1). The aim of this volume is to explore how people interact with each other in computer-generated virtual worlds.