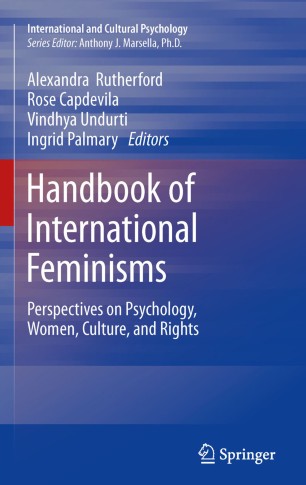 Although feminism has influenced psychological theory and practice across much of the world, their intersection has rarely been an easy one - particularly in post-colonial, and more recently, globalizing and transnational contexts.  The Handbook of International Feminisms offers a dynamic and nuanced picture of the diversity of feminism and its challenges around the world, both inside and outside of academia.

As seen in these pages, the very concept of ‘feminist psychology’ varies widely, as do the conditions under which it struggles or flourishes. Resistance to feminism may come from psychology in particular or the culture at large, in clashes between egalitarian ideals and longstanding cultural beliefs and practices that are inimical to women's interests. In some countries, the emergence of psychology and/or feminism is often seen as Western interference rather than welcome innovation. In others, activist psychologists are pressured to downplay aspects of their work or risk marginalization by the mainstream. Throughout this volume, the coverage is balanced between local context and global connection and commitment. Chapters analyze current and historical developments from:

As a comparative study, a call for new lines of communication, or a springboard for future interventions within psychology, the Handbook of International Feminisms is a significant volume for  psychologists of women and gender, clinical, social, and developmental psychologists, researchers in women’s studies, and upper-level students in women’s studies and behavioral science courses.