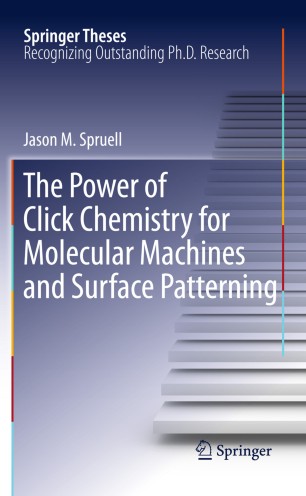 The Power of Click Chemistry for Molecular Machines and Surface Patterning

The union of covalent and noncovalent chemistries manifested in the mechanical bond represents one of the great chemical triumphs of the last half century. However, until recently, the preparation of mechanically interlocked compounds has often been an inefficient and limiting process. This thesis provides a detailed account of the great strides taken to increase the synthetic accessibility of donor-acceptor mechanically interlocked molecules by the application of highly efficient and ultramild chemical transformations during their template-directed synthesis. These new departures in synthesis have indeed played a transformative role in that more complex, higher-order, and functional architectures – once only a dream – are now comfortably within reach. Specifically, the formation of mechanical bonds in higher order rotaxanes and catenanes has become ever easier through the use of highly efficient click chemistries. The resulting mechanically interlocked compounds are functional molecular media for a host of applications including information storage, mechanical actuation, and drug release.

Jason Michael Spruell was born in Nashville, Tennessee on July 18, 1983. Although he moved from place to place throughout his childhood, he was primarily raised and educated in Chattanooga, Tennessee. Jason earned a B.S. Degree in Chemistry from the University of Alabama, graduating Summa Cume Laude in 2005. He and his wife, Joy, then moved to Los Angeles, California for him to work with Fraser Stoddart at the University of California at Los Angeles for his graduate degree supported by a National Science Foundation Graduate Research Fellowship as well as the Chancellor’s Fellowship from UCLA. Jason earned a M.S. degree in Chemistry from UCLA in 2007 before moving with Sir Fraser to Northwestern University, where he was awarded the Presidential Fellowship. Jason is a member of Northwestern University’s Society of Fellows and has been generously supported throughout the years by the Barry M. Goldwater National Scholarship, USA Today Academic All-American Team, the Presidential Scholarship from the University of Alabama, as well as the National Merit Scholarship. He and Joy are the proud parents of two sons – Nathan and London. They will all be moving shortly to the University of California at Santa Barbara for Jason to begin post-doctoral research as an Elings Fellow in Experimental Science through which he will research closely with Craig Hawker.