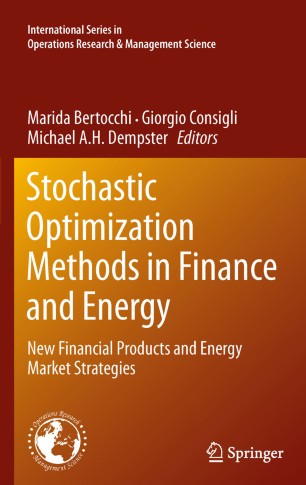 This volume presents a collection of contributions dedicated to applied problems in the financial and energy sectors that have been formulated and solved in a stochastic optimization framework. The invited authors represent a group of scientists and practitioners, who cooperated in recent years to facilitate the growing penetration of stochastic programming techniques in real-world applications, inducing a significant advance over a large spectrum of complex decision problems.

After the recent widespread liberalization of the energy sector in Europe and the unprecedented growth of energy prices in international commodity markets, we have witnessed a significant convergence of strategic decision problems in the energy and financial sectors. This has often resulted in common open issues and has induced a remarkable effort by the industrial and scientific communities to facilitate the adoption of advanced analytical and decision tools. The main concerns of the financial community over the last decade have suddenly penetrated the energy sector inducing a remarkable scientific and practical effort to address previously unforeseeable management problems. Stochastic Optimization Methods in Finance and Energy: New Financial Products and Energy Markets Strategies aims to include in a unified framework for the first time an extensive set of contributions related to real-world applied problems in finance and energy, leading to a common methodological approach and in many cases having similar underlying economic and financial implications.

Giorgio Consigli is an Associate Professor, Department of Mathematics, Statistics and Computer Science at the University of Bergamo, Italy. He has been Director the University’s FinMonitor Research Centre since 2006, and was elected Member of the International Commission on Stochastic Programming (COSP) in 2007. He received his undergraduate degree in Economics (Honors) at the University of Rome, La Sapienza, where he also earned his MS in Banking, and earned his Ph.D. in Mathematics at Cambridge University, where he was supervised by M.A.H. Dempster. Marida Bertocchi has been a Full Professor in Financial Mathematics at University of Bergamo since 1992. She was Dean of the Faculty of Economics and Business Administration from November 1996 to October 2002 and scientific coordinator of the PhD program in "Computational Methods for Economic and Financial Forecasting and Decision Making" since 1992. She acted as a member of the accreditation committee for the Government of Cyprus. She was referee in the EEC Vth framework and she is currently referee for the EEC VIth framework. Michael A. H. Dempster is Professor Emeritus at the Statistical Laboratory, Centre for Mathematical Sciences, Cambridge University. He earned an MA at Oxford University and an MS and Ph.D. at Carnegie Mellon University, and founded the Centre for Financial Research at the Judge Business School at Cambridge. He is currently Managing Director of Cambridge Systems Associates, Ltd., a financial services consultancy. He is author, editor, or translator of 11 books, including the now out of print Large-Scale Linear Programming with George B. Dantzig and Markku Kallio (1981).