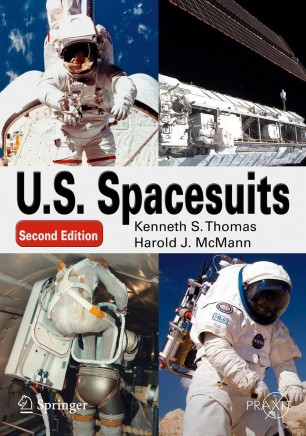 Spacesuits are far more than garments. They are a personalized spacecraft that allows direct contact and interaction with everything beyond our world, and a last refuge for survival in a disaster. Creating safe, reliable, and comfortable spacesuits is an ongoing challenge that has spanned over four decades. "U. S. Spacesuits, 2nd Edition" by Kenneth S. Thomas and Harold J. McMann details the technical evolution of U. S. spacesuits from their roots in high altitude aviation and vacuum tube development to present day, with an additional look into the future. This primary source of spacesuit information explains the functions, historical development, and use of spacesuits from a worldwide perspective. In this new edition, the authors update the story of U.S. spacesuit development and efforts, from the design challenges modern engineers face to the latest roles of spacesuits in space exploration.

The book also provides a close up look at NASA's new Constellation Space Suit System as well as Apollo prototype configurations that have been discovered since 2005. Also not in the earlier edition is a prototype and model of the Gemini pressure suit and an explanation of its development. Finally, there are new insights into the suits used for the Gemini, Apollo, Skylab, Space Shuttle, and International Space Station missions.

As a second generation space engineer, Thomas grew up with U.S. space programs. He worked as a task-manager/engineer on the Shuttle Extravehicular Mobility Unit (EMU, NASA's current going-out-in-spacesuit-system) program and was a principal investigator on next generational suit. His efforts resulted in his developing an in-depth background on spacesuits. This experience was further supplemented by extensive personal research into spacesuit design.

McMann's career has spanned over 40 years in the area of spacecraft environmental control and spacesuit systems. He joined NASA during Project Mercury and has participated in every U. S. manned space endeavor, including the assembly of the International Space Station. He has been a project engineer, Extravehicular Activity (EVA) suit life support system manager, 0-g aircraft and vacuum chamber test subject, real-time flight support console engineer, and overall EVA hardware manager in NASA's EVA Project Office. Following his retirement from NASA in 1997, he joined Hamilton Sundstrand as a technical specialist in the area of failure analysis and resolution. He retired from Hamilton-Sundstrand in 2002 and continues to act as consultant to NASA and the aerospace industry.

“In this fascinating book the reader will get a comprehensive look into everything about the American spacesuits … . U.S. Spacesuits is the perfect book for a space flight enthusiast, as it goes into great detail about spacesuits and manages to make it obvious how and why spacesuits are important. The book is also full of images of different spacesuits … .” (Kadri Tinn, AstroMadness.com, July, 2014)
Buy options