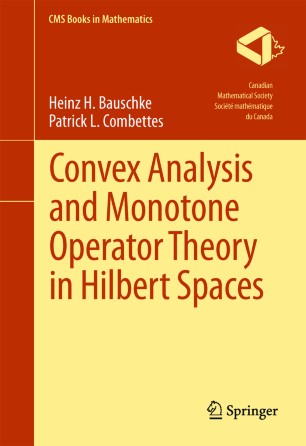 This book presents a largely self-contained account of the main results of convex analysis, monotone operator theory, and the theory of nonexpansive operators in the context of Hilbert spaces. Unlike existing literature, the novelty of this book, and indeed its central theme, is the tight interplay among the key notions of convexity, monotonicity, and nonexpansiveness. The presentation is accessible to a broad audience and attempts to reach out in particular to the applied sciences and engineering communities, where these tools have become indispensable.

Graduate students and researchers in pure and applied mathematics will benefit from this book. It is also directed to researchers in engineering, decision sciences, economics, and inverse problems, and can serve as a reference book.

Patrick L. Combettes received the Brevet d'Études du Premier Cycle from Académie de Versailles in 1977 and the Ph.D. degree from North Carolina State University in 1989. In 1990, he joined the City College and the Graduate Center of the City University of New York where he became a Full Professor in 1999. Since 1999, he has been with the Faculty of Mathematics of Université Pierre et Marie Curie -- Paris 6, laboratoire Jacques-Louis Lions, where he is presently a Professeur de Classe Exceptionnelle.