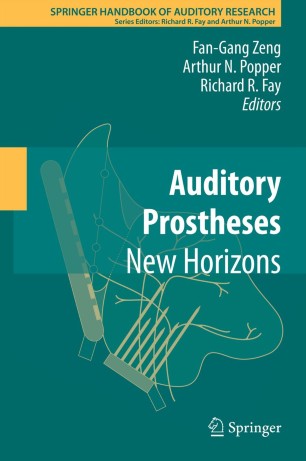 Cochlear implants are currently the standard treatment for profound sensorineural hearing loss. In the last decade, advances in auditory science and technology have not only greatly expanded the utility of electric stimulation to other parts of the auditory nervous system in addition to the cochlea, but have also demonstrated drastic changes in the brain in responses to electric stimulation, including changes in language development and music perception. Auditory Prostheses: New Horizons examines a range of current issues that concern complex processing of sounds by the prosthetic device users.

About the Editors
Fan-Gang Zeng is Professor and Research Director in the Department of Otolaryngology - Head & Neck Surgery, University of California, Irvine. Arthur N. Popper is Professor in the Department of Biology and Co-Director of the Center for Comparative and Evolutionary Biology of Hearing at the University of Maryland, College Park. Richard R. Fay is Distinguished Research Professor of Psychology at Loyola University Chicago.