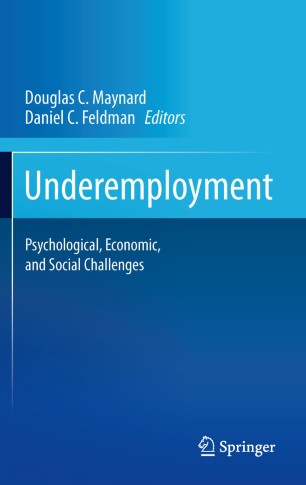 While joblessness is a signature problem during times of economic stress, underemployment —the lack of adequate, meaningful work—affects large numbers of workers even during relative prosperity. Historically overshadowed by unemployment, the pervasive and serious social problem of underemployment warrants

greater attention from scholars in a variety of disciplines.

Recognizing underemployment as a series of related phenomena (e.g., fewer hours of work, poor pay, jobs for which workers are overqualified), Underemployment: Psychological, Economic, and Social Challenges is the first book to provide an in-depth examination of the causes, dynamics, and consequences of underemployment and how the problem might be addressed. Experts from management, economics, psychology, and sociology present their unique approaches to understanding underemployment in terms of theory development, empirical findings, and implications for policy and practice. Some of the major topics covered include:

A comprehensive look at a most timely issue, Underemployment: Psychological, Economic, and Social Challenges will inform the work of researchers, scholars, managers, and policy makers dealing with underemployment issues for years to come.